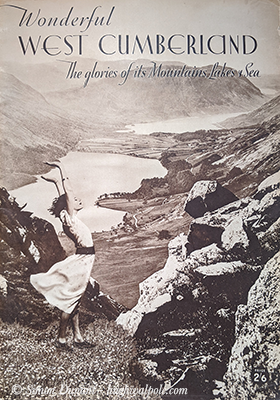 Apart from collecting Hugh Walpole’s books, I’ve also taken to tracking down the many magazines that Hugh contributed to – and there were many of those both in the UK and America.

In 1936 Whitehaven News Limited published a magazine called ‘Wonderful West Cumberland, The glories of its Mountains, Lakes & Sea’  and as one of the prominent champions of the region he had lived in since 1924, Hugh Walpole was asked to write an introductory piece.

In the foreward Hugh writes:

I have been asked to write a few words as an introduction to this beautiful book. I gladly do so because it seems to me the best picture book of the Cumberland County that I have ever seen.

There are many guides to the Lakes – but West Cumberland is more than “beauty lying in the lap of terror” as some eighteenth century tourist called it.

It is not only Mountain and Lake but also Sea and Castle and Mine and Town. As a child I spent my summer holidays year after year in the village of Gosforth between Wastwater and Seascale. every afternoon we went into Seascale to bathe and I sat. on the shore, sucking bullseyes and reading the beautiful stories of Murray Gilchrist in the “Weekly Telegraph”. They say nowadays that there is no such thing as Time so, in all probability, there I still am sitting on Seascale sands in the very heart of Cumberland. I can see from there the rounded hump of Black Combe, almost catch sight of the Whitehaven mine shaft, look back over my shoulder and swallow that incomparable view of mountains against the sky, while along the faint yellow stretch of sand the sea turned its white edge and the shadow of the Isle of Man lies like a thin cloud on the horizon. That is Cumberland to me and it is that Cumberland these pictures so beautifully show.

I hope their beauty and variety will bring many happy people here and people perhaps who have been tired and worried and harassed – let them come and Cumberland will straighten out their troubles.

Below you’ll find a selection of the pages in this magazine, all displaying the wonders of this amazing corner of Britain that Hugh Walpole was so proud to now call his home.