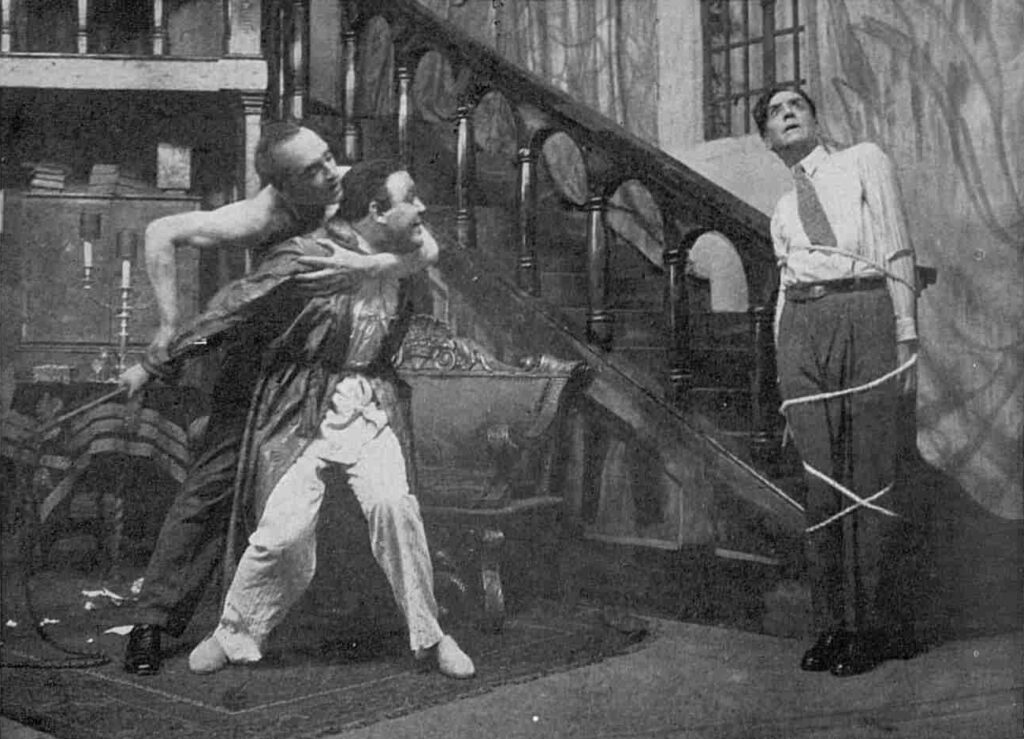 Whilst Hugh Walpole was a prolific novelist, he also wrote a number of theatrical plays, playwrights adapted his novels for the stage and he played a part in the stage works of other authors too.

In this article I’ll cover as extensively as I can the theatrical works of Hugh Walpole.

If you have read Hugh Walpole’s first Novel “The Wooden Horse”, a family saga featuring Cornwall and a nod to New Zealand, you’ll realise the play is titled after the book’s character Robin Trojan.

Hugh embarked on this first venture into writing plays at the end of November 1912, enlisting the expert assistance of the playwright Rudolf Besier who had made his own considerable success by that time with Don and Lady Patricia. 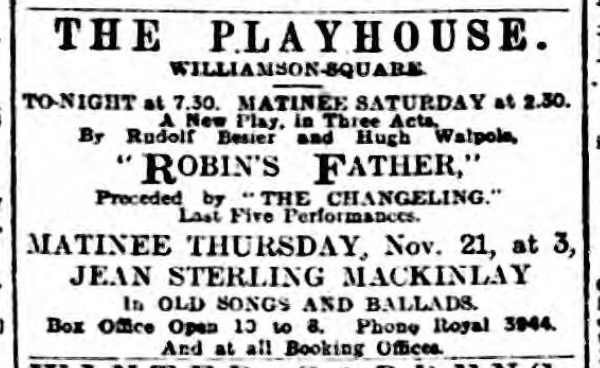 Hugh’s next excursion into writing for the stage was in 1918. It was a comedy titled “The Comfortable Chair”. It was written in Polperro as a diversion whilst on a much needed 6 weeks break from his sometimes stressful work at the Foreign Office under Lord Beaverbrook.

During the first world war many literary figures worked at the War Office drafting propaganda or becoming war correspondents , including John Buchan and the notable playwright Edward Knoblock, both of whom Hugh was friends with.

The Comfortable Chair was never acted, though there were more stage plays to come later in Hugh’s career that would certainly be brought to life.

Although not credited to Hugh Walpole (and the press of the day were at odds of who did actually write the play), one of Rudolf Besier’s most famous plays “The Barretts Of Wimpole Street” written in 1921 was going to be a collaboration between Besier and Walpole, with both men fervently throwing ideas around for the play. In the end though Hugh had started gaining success with his novels by 1921 and  Besier was in full flow with The Barretts.

Hugh had made contributions to The Barretts early on and Besier credited Hugh Walpole with coming up with the idea for the play in a letter, though as his success grew, Hugh regrettably resigned from the work, leaving Besier to write the play himself . Hugh later said he probably missed out on a small fortune from The Barretts.

Hugh felt nothing but affection for Besier though, and took great pride in the play’s success none the less and The Barretts of Wimpole Street in its printed version was dedicated to Hugh by Besier.

The stage adaptation of Hugh’s book “The Portrait of A Man With Red Hair” was dramatised by playwright Benn Wolfe Levy in 1928 and opened at the Little Theatre, John Street, London on February 27th 1928 and ran for just a couple of months. 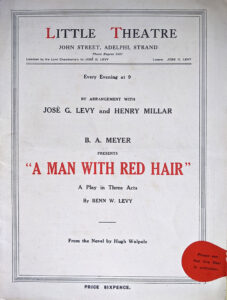 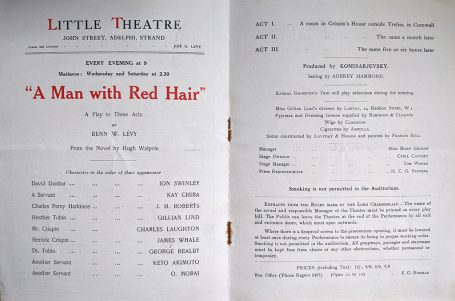 It was a gothic horror play detailing the bitter revenge and mental and physical torture the character Mr Crispin inflicts upon a world rejecting him for his ugliness. The play starred leading actor of the day Charles Laughton as Crispin and was praised by the literary press.

Laughton apparently spent many hours under the arches of Charing Cross practicing with a bull whip for the play and Hugh was very pleased with Laughton’s performance, writing to a friend, “He brings my terrible man to sickly life – marvelous!”

The play went on to open in America on June 6th 1928 at the Springdale Theatre, Stamford Connecticut with Crane Wilbur playing the American part that Laughton had so successfully created in London. 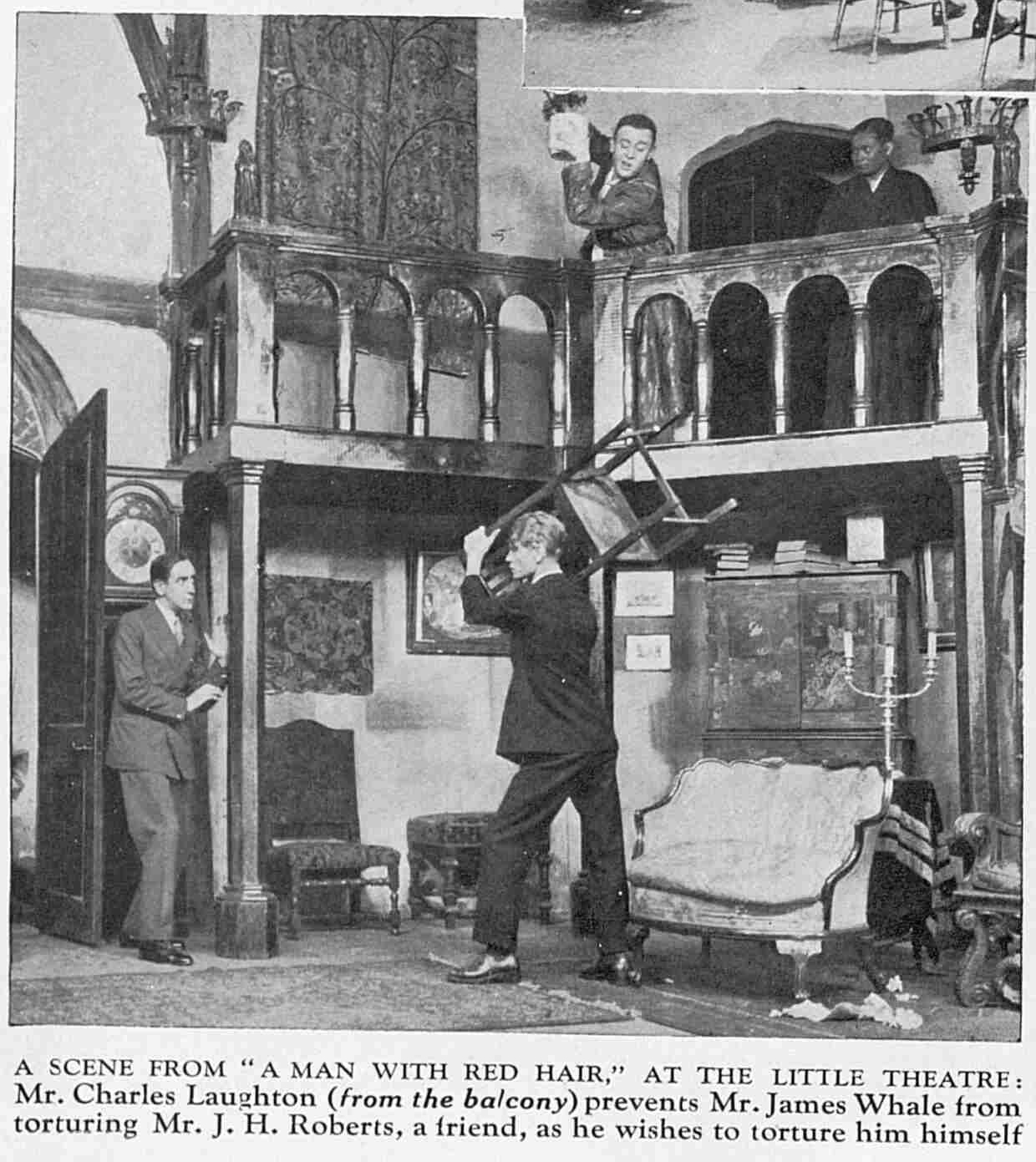 The play also returned to the stage again in London fourteen years after it’s first performance,  opening at the Ambassadors theatre in West Street in the heart of London’s theatre district, with Francis Sullivan taking on the lead role.

In August 1929, Hugh travelled to Sweden. After being entertained lavishly by reporters and others in Stockholm he went on to stay with friends in Rättvik. His host was Baron Erik Palmsteirna, the Swedish ambassador at the Court of St James, and his family and whilst there he started a play called the Limping man. The Harry Ransom Center collection of Hugh’s work at The University of Texas at Austin lists handwritten, typed and typed carbon copy manuscripts in their archives, so it’s probable that the play never made it to publication, let alone the stage. 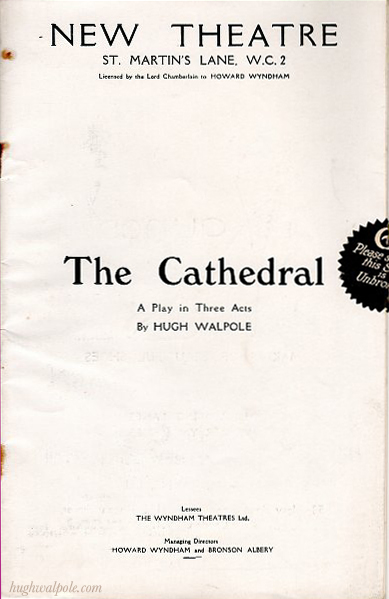 The Play “The Cathedral” was based on Hugh’s book of the same name (which in turn was partly based on Hugh’s first attempt at a novel – “The Abbey”). At the end of January 1931, Hugh set out on a six weeks’ cruise to the West Indies. He didn’t enjoy it very much, however he did manage to write the whole of his own dramatic version of The Cathedral on that cruise.

The action of The Cathedral takes place entirely in the summer of Queen Victoria’s Diamond Jubilee Year, 1897 and follows the story of the Archdeacon of Polchester, Adam Brandon, an autocratic character who’s life descends into despair and angry feuds with the scheming Canon Ronder.

The Cathedral was tried out first at the Embassy Theatre, Swiss Cottage in Hampstead, London. By this time he had leased a house for his friend and chauffeur Harold Cheevers and his family in Hampstead Garden Suburb just a few miles from the theatre.

Hugh attended its opening night with Harold and his wife Ethel on November 21st 1932, despite feeling ill all day with nervous anticipation for its debut.

At the final curtain the reception was rapturous, Hugh made a speech and afterwards the press were unanimous in its approval. Soon after the play was transferred to The New Theatre in London’s West End.

The play was published by Macmillan & Co in April 1937, and Hugh gave Harold Cheevers a first edition personally inscribed to him as a gift, referring to himself as Hugh ‘Ronder’ Walpole in the dedication. 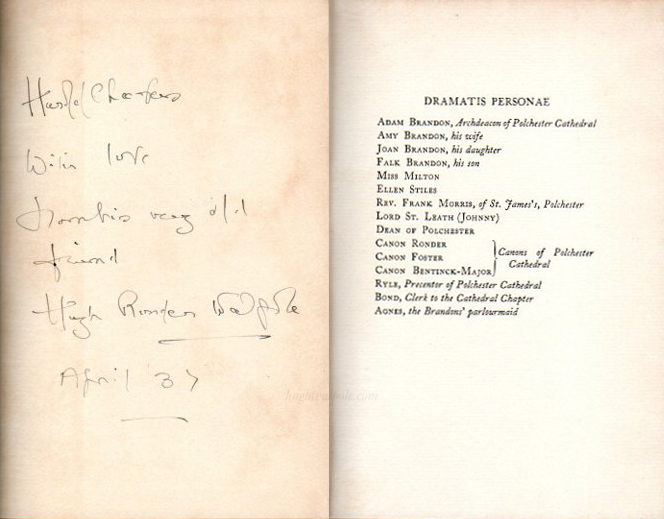 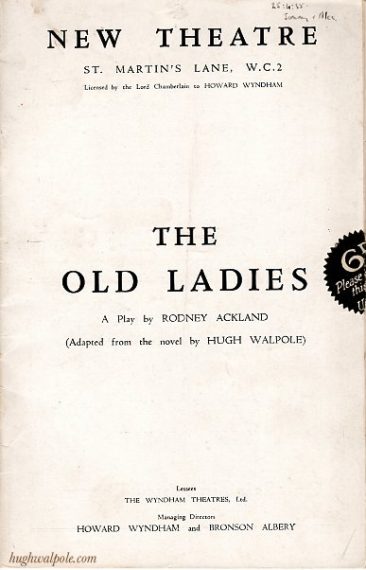 The English playwright Rodney Ackland took on the stage adaptation of Hugh’s book The Old Ladies in 1935.

It opened in London at The New Theatre in St Martin’s Lane on the 2nd of April 1935. Hugh went to a rehearsal of the play but apparently slept all the time he was there and decided to leave them to it, however Hugh did attend the successful first night and hailed it a success.

The play begins in the run up to Christmas. In the city of Polchester, three old ladies rent an old run down house, including Miss Beringer, who had just moved in. Miss Beringer has a rather nervous disposition, and makes friends with Mrs Amorest, one of the neighbours.

When she meets one of the tenants, she finds her an odd woman who takes too much of an interest in Miss Beringer’s prized possession, an amber figurine.

On the morning of Christmas Eve, there is a strange feeling in the house, despite the neighbourly efforts of Mrs Amorest to try to create some festive cheer. The play’s set depicted all three rooms of the house where the action took place all at once on the same stage throughout. 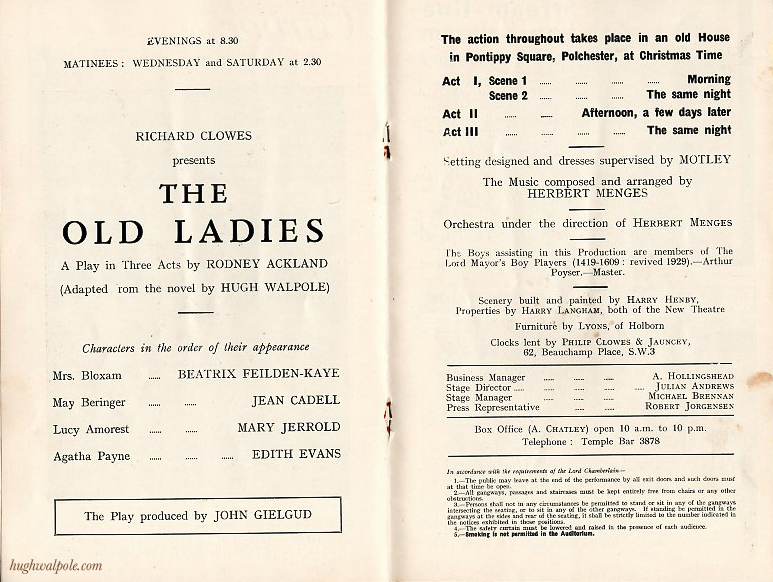 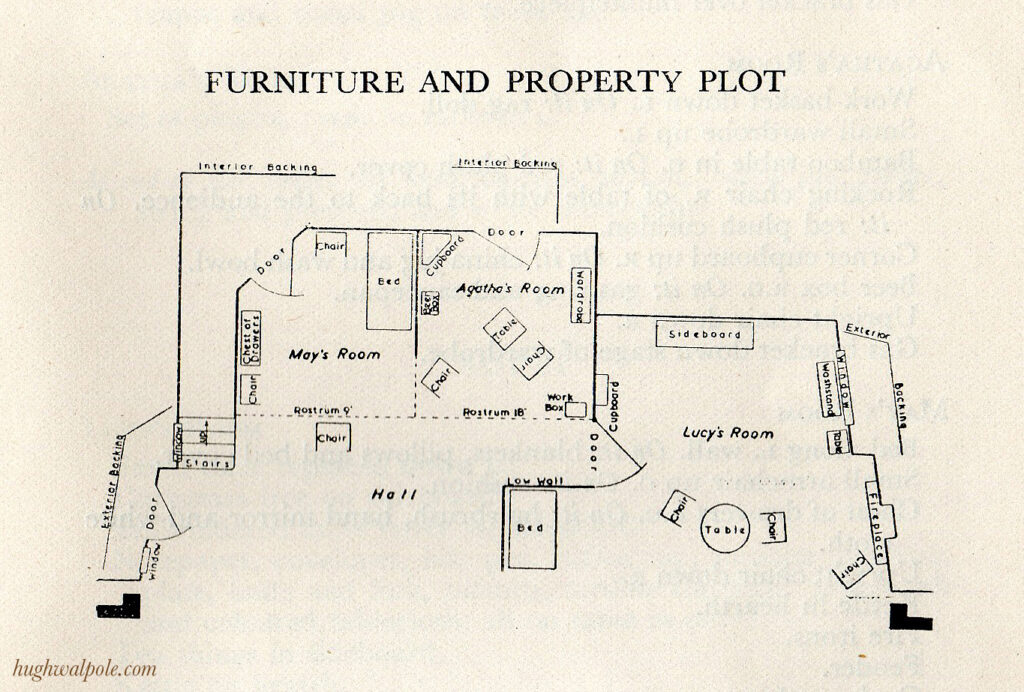 The original 1935 cast at the New Theatre in London included Edith Evans, Jean Cadell and Mary Jerrold, though the play would go on to be revived many times over the years, including the Q theatre, Kew in 1935, The Embassy Theatre, Swiss Cottage, London in 1953, Birmingham, Dundee and it even played stateside in New York. Its most recent outing was in 1993 at the Greenwich Theatre.

It was also performed as a radio drama on BBC Radio 4’s Saturday Night Theatre on Saturday 2nd March 1968.

The Original 1935 Cast of The Old Ladies. 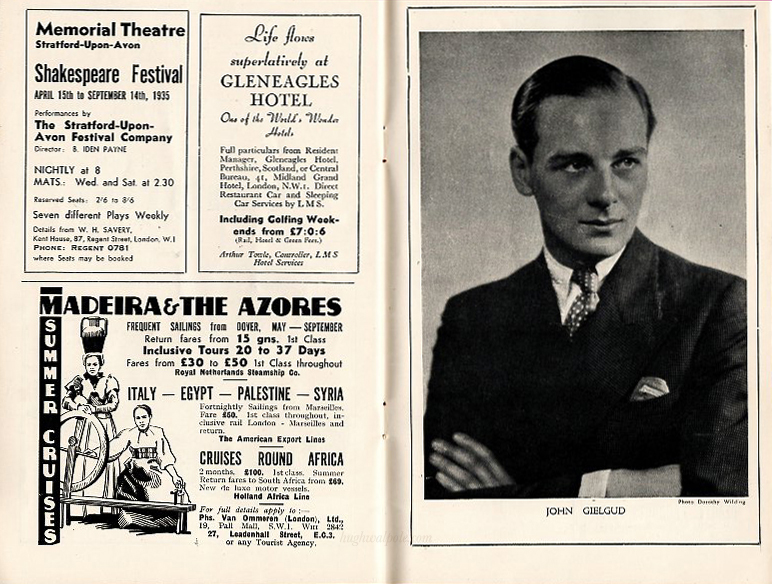 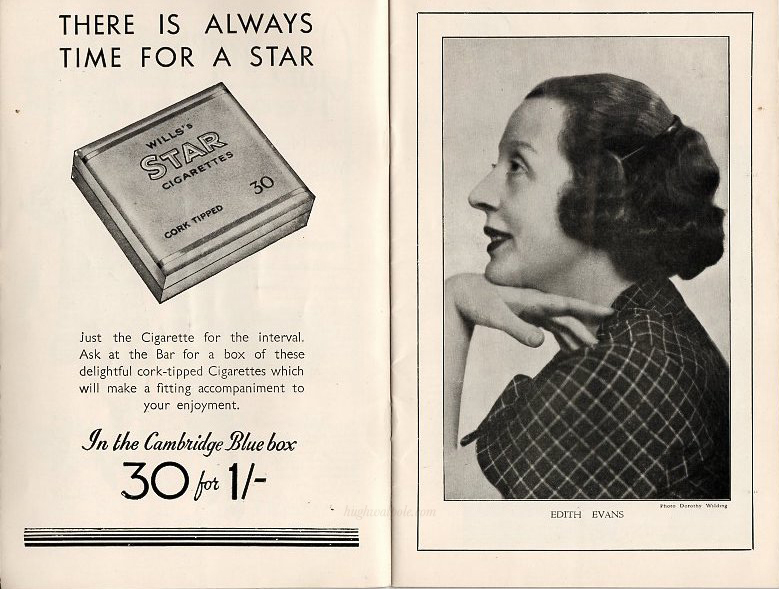 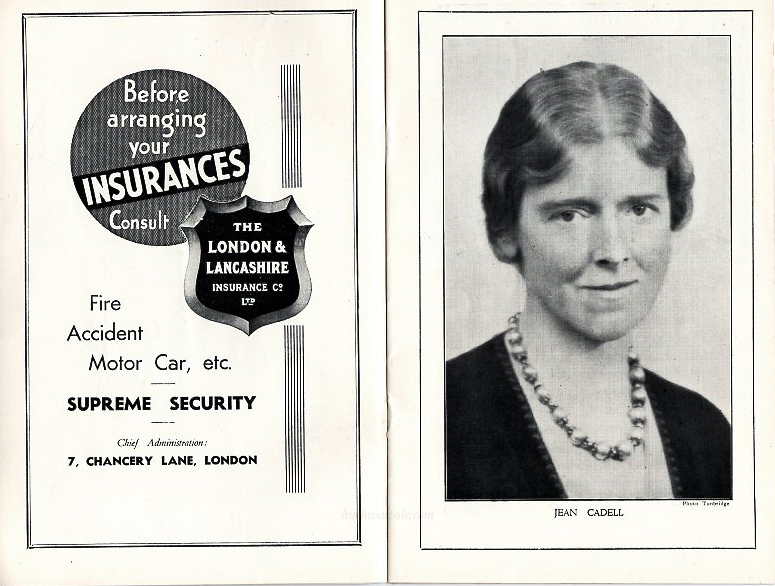 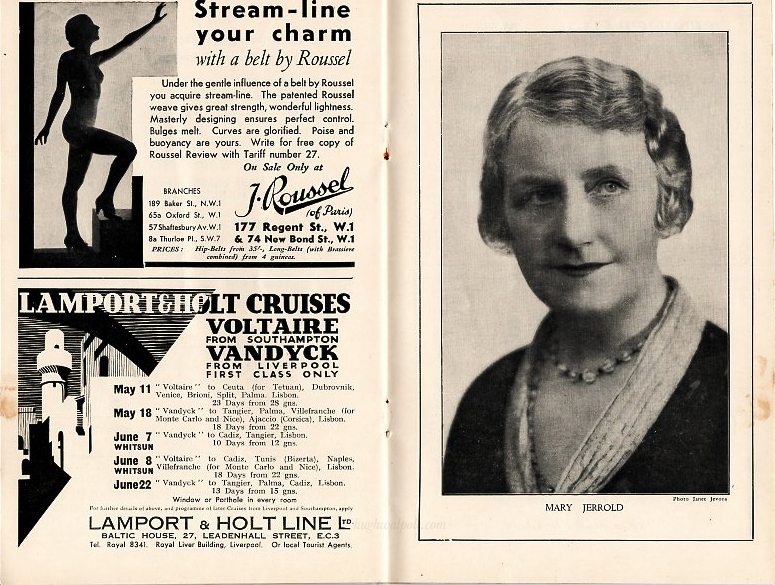 Hugh Walpole’s last theatrical work is a a play in three acts entitled “The Haxtons. The theme deals with the reactions of a family when the wife of a prosperous country gentleman is convicted of stealing some trivial articles from a shop.

Hugh wrote the Haxtons during a lull in writing at the end of 1937. He began to write it in October and finished it before the end of November. He had just finished writing his novel The Joyful Delaneys and since he always had a tradition of starting new books at Christmas, writing The Haxtons filled the gap nicely. Hugh returned to the play the following year to lengthen it, and just before supper one Sunday in October 1938 made further alterations to it.

At the beginning of 1939 after spending a few days at Brackenburn with his brother Robin and Sister Dorothea, he drove to Liverpool to spend the week watching rehearsals of The Haxtons at The Liverpool Repertory Theatre, also known as The Playhouse. The play was directed by Hugh’s old friend William Armstrong. Hugh said at the time that in some ways the chief pleasure of playwriting was “to see one’s characters move away from the paper into free life”. 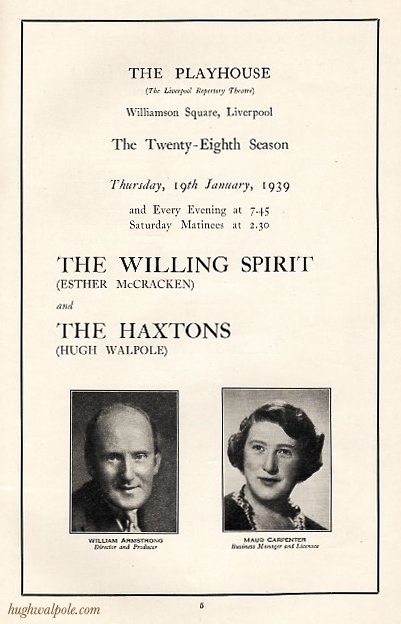 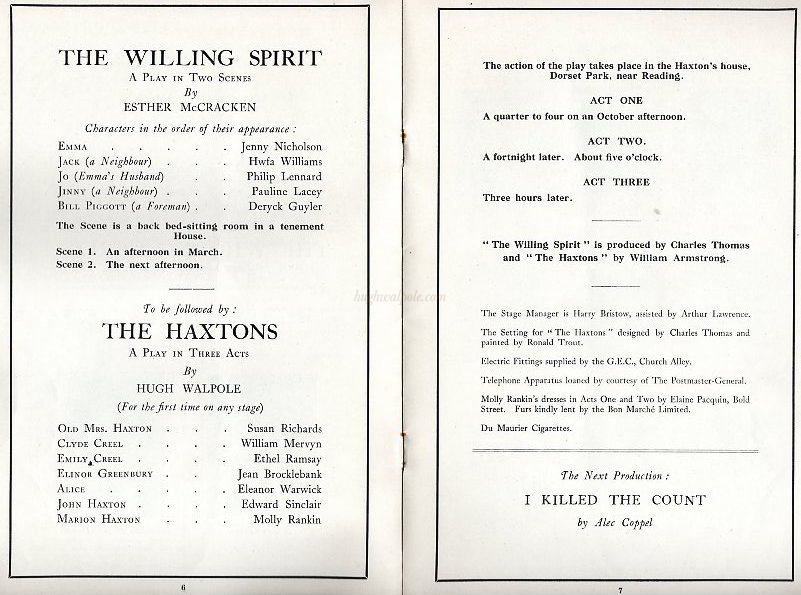 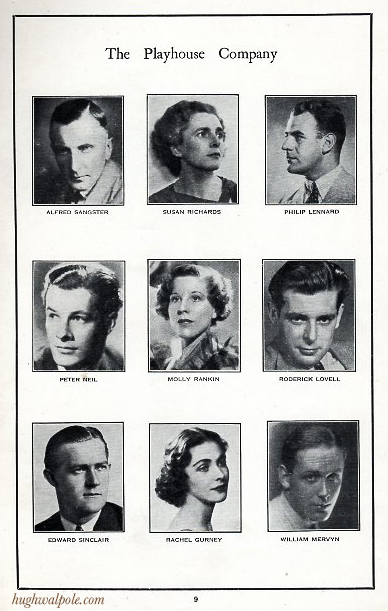 The first night was on January 19th 1939, and to Hugh’s delight the audience were captivated. When he came on stage to make a curtain speech he was greeted with shouts and cheers.

The Haxtons went on to be performed by theatre companies around the world, including a week long performance by the Adelaide Repertory Theatre Company at the Tivoli Theatre, in Adelaide, Australia

In 1939, Leslie Burgess adapted the Hugh Walpole book “Captain Nicholas” for the stage. It opened on July 10th at The Richmond Theatre. 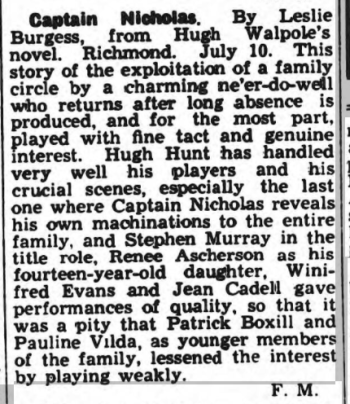 In 1945, The Cathedral had a run at the York Repertory theatre for one week from Monday 16th April. It notably had an early performance from Leslie Phillips who after being demobbed as a lieutenant in December 1944, is said to have forged his acting career by taking in “the murkiest rat-infested old playhouses and music halls in the North of England”. 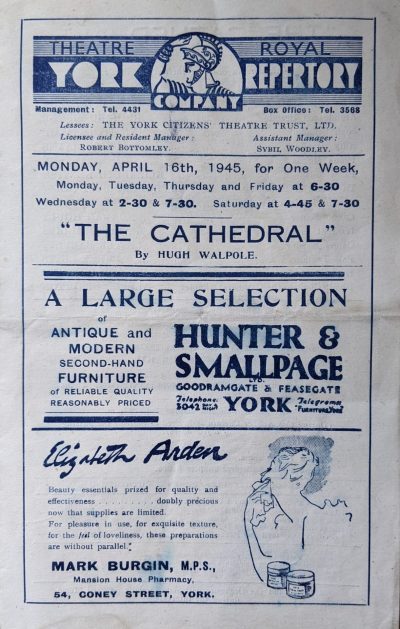 In 1957 and 1973, an adaptation of Hugh Walpole’s short story “The Silver Mask” which first featured in his own 1933 book of short stories “All Souls Night” was shown by ITV. The 1953 production was adapted by Barbara S Harper and shown live during the very early years of ITV under the “Television Playhouse Banner”.

The 1973 production was adapted by Trevor Griffiths for the ITV series of plays for television called “Between The Wars”.  It was produced by Verity Lambert, and featured an early career performance by Zoë Wanamaker as Ada Abbot. 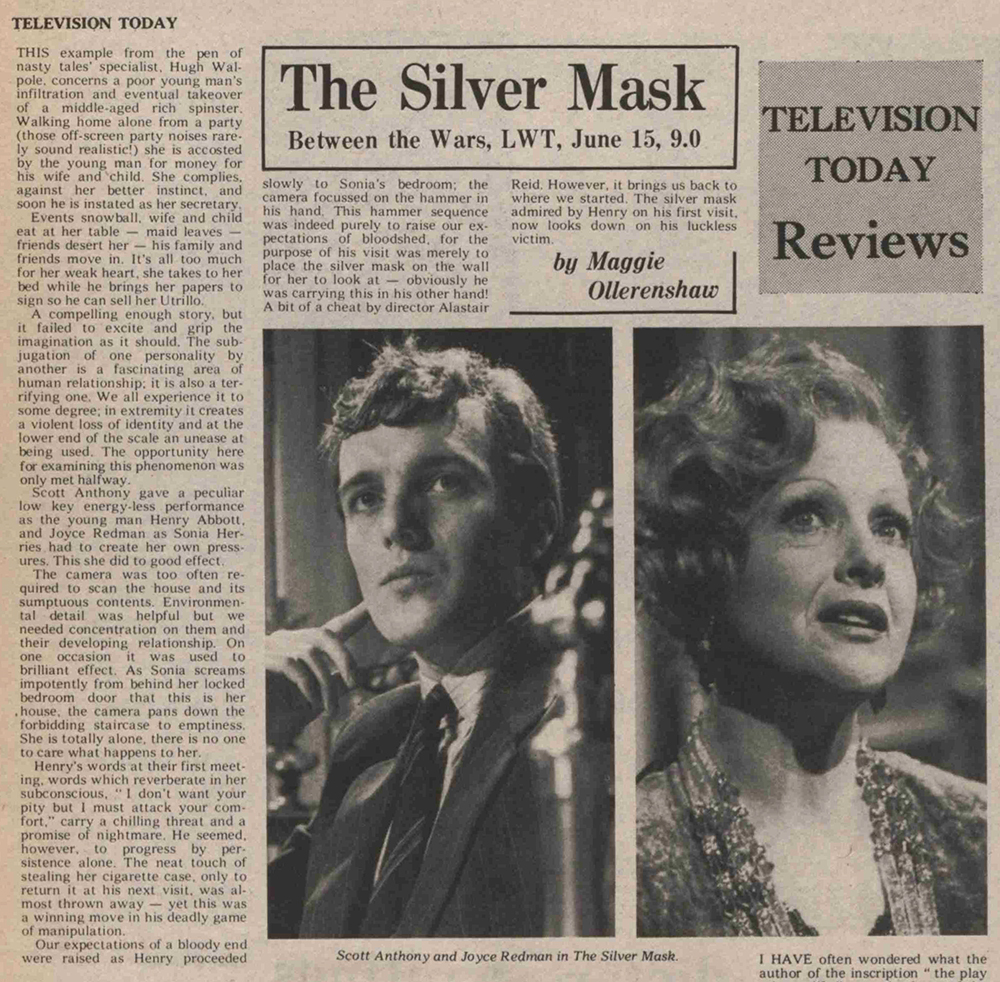 In 2013 Louis page adapted Rogue Herries for the stage at The Theatre By The Lake, Keswick. It ran for a nearly a month from the 22nd April to the 20th March.

With the playhouse sitting on the opposite side of Derwentwater to Brackenburn, and just a short walk to St John’s Churchard where Hugh is buried, it was fitting that his most famous novel made it to the stage in his home town. 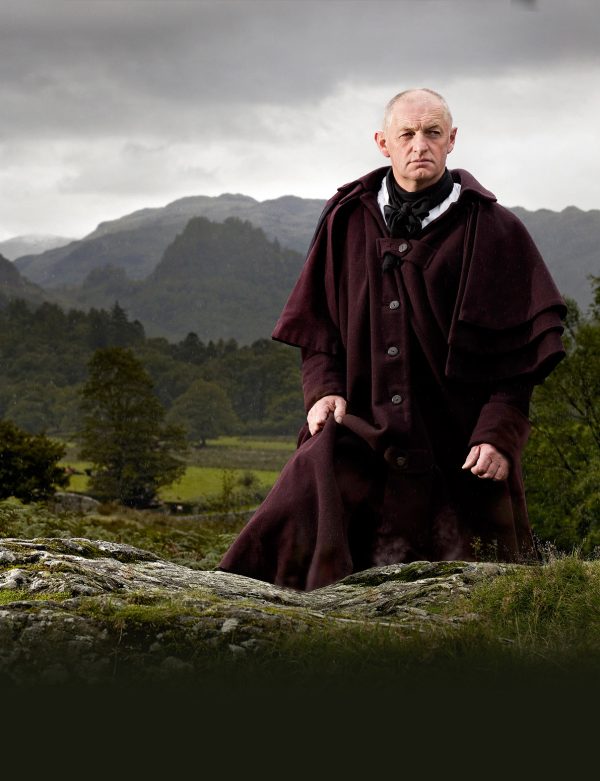 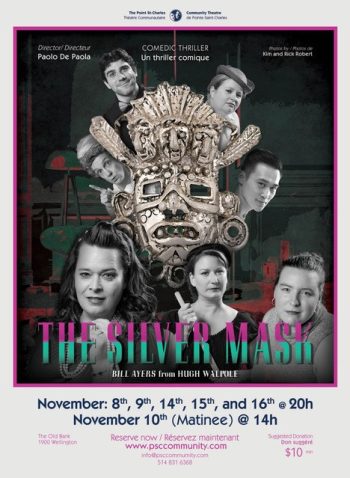 All theatre programme, book and original play scans in this article are from original items owned by the site owner.