On my visit to the Lake District in 2019, one morning I visited the museum in Keswick, where on display was one of Hugh Walpole’s Herries manuscripts. It was fascinating to see the original writing penned in the 1930s, though I was more surprised and delighted to discover a small drawing of a rabbit in the margin.

I had never before seen a drawing by Hugh’s hand, only ever his handwriting.

That morning in Keswick Museum, I left curious as to what the significance of the rabbit drawing was. The Lake District was synonymous with Beatrix Potter of course, who featured many rabbits in her stories, though I didn’t recall any rabbits appearing significantly in any of Hugh Walpole’s books.

So after a fine morning in the museum I proceeded to St. John’s Church in Keswick, to pay my respects at Hugh Walpole’s grave.

As I walked into the churchyard it was remarkably quiet, the entire church was eerily empty, and there was neither any people or animals in the churchyard. It was a weekday, though it was odd that it was so deserted. 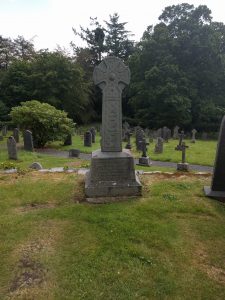 I stopped by the Celtic Cross marking Hugh Walpole’s grave, and duly said a little prayer of gratitude for the wonderful stories Hugh has brought to the world. After taking some time to absorb the wonderful view over Derwentwater, thinking how Hugh had the most wonderful spot to rest his soul, took a picture of his place of rest and decided it was time to head back.

As I turned to walk down the gravel path to my surprise two small brown rabbits appeared as if from nowhere from behind a gravestone. I watched in awe as these two bunnies hopped about playfully, carefree and with so much joy in their eyes. Occasionally they’d stop to look at me, then hop around playfully together again.

Suddenly I recalled the rabbit in the manuscript I had seen earlier that day, and wondered perhaps if like one of HW’s ghostly tales, that this might have been a sign from the other side and perhaps the spirits of Hugh and Harold were enjoying their spiritual freedom of the Lakes right there in front of me.

The rabbits played for a minute or so, then disappeared into a hedge and one again the graveyard was deserted.

It was one of those moments that you never quite understand what happened, but leaves you feeling a presence greater than you and that there is a bigger universe out there always ready to surprise you. I was so struck by the experience I didn’t get to take a photograph of the rabbits, perhaps I was never meant to.

I have since seen more examples of Hugh Walpole’s rabbits appearing in the front of books that bear his inscription. You’ll see a scan of one of Hugh’s rabbit drawings in the footer of every page on this website. I scanned this drawing from Hugh’s Brackenburn library copy of Selected Poems of Matthew Arnold and it was drawn in August 1930.

I have eternal gratitude for that spiritual moment in St John’s Church where I first truly experienced Hugh Walpole’s rabbits and it is an experience I’ll carry with me forever.