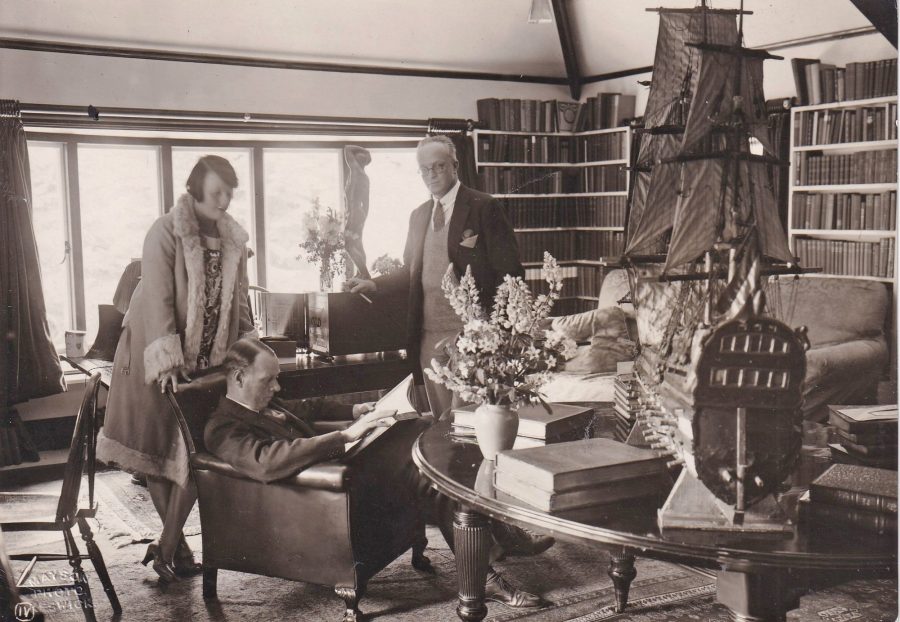 Despite my constant in depth research about Hugh Walpole, I’m still amazed at the new puzzles and enigmas that cross my path about Hugh’s work, life and posessions.

I recently received an email from Nick Redman who heads up the Hugh Walpole Society with a question about the beautiful model ship that Hugh displayed on the table in his writing room at Brackenburn.

The model features in a number of photographs of Hugh’s study though nowhere does it show up more prominently than in a photo taken with him around July 1928 of Sinclair Lewis and his new wife, who were on a visit to Hugh’s cumbrian home and it now resides in All Saints church, St Andrews in Fife in Scotland UK after Hugh’s sister Dorothea gifted it to them in 1954 – 13 years after Hugh’s death.

Nick posed the questions – where did the model ship come from? Was it purchased or was it a gift? Why did Dorothea gift it to All Saints St Andrews? I think I might have a few details, press snippets and a couple of deductions that could go some way to shedding some light on the enigma of Hugh Walpole’s model ship.

Let’s start by seeing if we can identify a bit more about the model itself by starting at the end on why it ended up at All Saints.

‘Sacred Vessels’ are common according to the Church of Scotland. Shipmasters would commission models for churches as a votive offering, in fulfilment of a vow, and a token of gratitude for safe deliverance from peril at sea.

Additionally the imagery of a ship traveling across the sea, sometimes peaceful sometimes stormy, is also used as an allegory for life itself. Given Hugh Walpole’s turbulent early years and his connection to the clergy through his father George Henry Somerset Walpole I could see why he might like the symbolism of owning such an item. 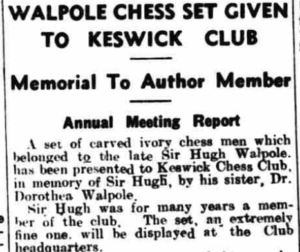 A number of years after Hugh Walpole’s death in 1941, his sister Dorothea has been documented gifting personal items of Hugh’s estate to various organisations.

As an example, an article in the Penrith Observer 14th October 1947 details the gifting of Hugh’s beloved chess set that he and Harold spent many evenings using at Brackenburn, to the Keswick Chess club

A few years later in 1954, Dorothea gifted Hugh’s model ship to All Saints church, and the best account of this I have found is in the incredibly detailed thesis Ship Models In Scottish Churches by Dr Meredith Greiling, Principal Curator of Technology at National Museums Scotland.

Meredith is also a former curator of Historic Photographs and Ship Plans at the National Maritime Museum, Greenwich, and Curator of Maritime History at Aberdeen Maritime Museum and has a particular interest in Scottish maritime history. In Greiling’s thesis she writes:

The ship model that was donated to the church is of an unnamed 38 gun Dutch warship of the early seventeenth century, and it hangs in an archway at the rear of the nave. It was the gift of Dr Dorothea Walpole, an Edinburgh medical doctor, in honour of her brother, the novelist and screenwriter Sir Hugh Walpole. He had kept the model in the study at his house in the Lake District, and it can be seen in a watercolour of the writer at work in the collections of Keswick Museum.

Hugh and his sister had no obvious connection with St Andrews, but there was a strong family connection to the Episcopalian Church through their father; they were the children of a Bishop of Edinburgh at St. Mary’s Episcopal Cathedral.

…Given that the Walpoles enjoyed an aesthetic life style of some privilege, one full of Christian devotion, the donation of an antique ship model would certainly have been consistent and in keeping with the antique elegance of the church. If we consider this as a romantic gesture from a family of writers for the genteel seaside town of St Andrews, then the incongruity of the age and style of the model, and its lack of connection to the place or the people, becomes irrelevant.

Although there is a documented link between Hugh Walpole and St. Andrews. The Fife Free Press, November 20th 1937  shows that Sir Hugh Walpole, as he was by then, stood against Lord Macgregor Mitchell K.C. in the election for Rector of St Andrews university (and lost). Perhaps Hugh was vying to take the same position as Sir Walter Scott did in 1825.

There is scant mention of Hugh’s rectorship bid in Rupert Hart-Davis’ biography of Hugh Walpole – he mentions a one sentence reference to “a brief visit to Scotland” in November 1937. Whether the St. Andrews University connection extends to a connection between Hugh and All Saint’s church hasn’t yet surfaced. 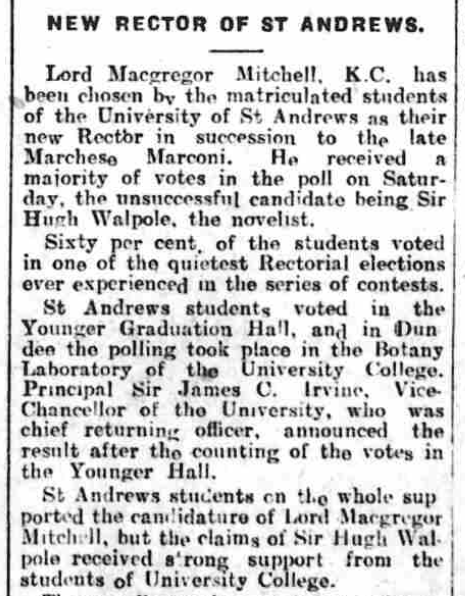 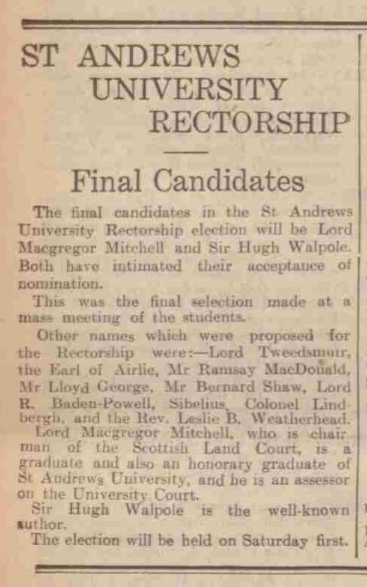 Intriguingly though, further on in Greiling’s thesis on page 200, there is a case study that describes Hugh’s model ship in superb detail. 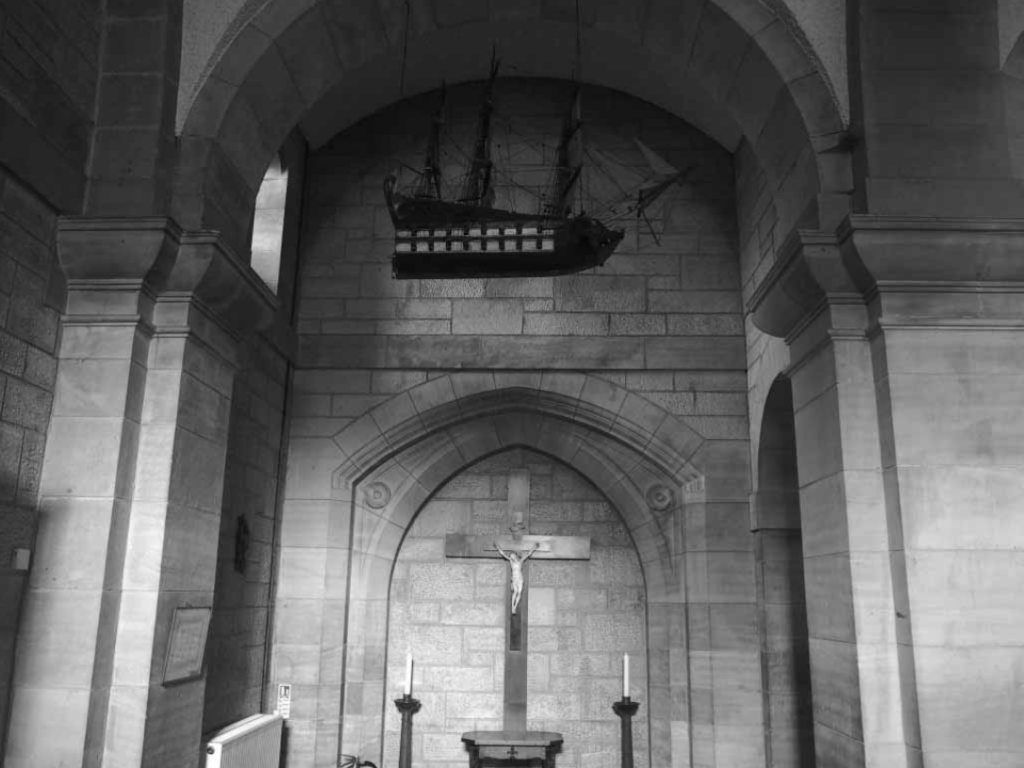 Description: Hull is painted black with white and gold painted gun decks highlighted, guns and gun ports are red and gold. The figurehead is a gilded lion holding a saltire, the cross of St Andrews, on a shield. Anchor stocks are painted green with red hoops. Crude quarter galleries are indicated with gilded and red gesso carvings added. Two small gilded lions, possibly also gesso additions, lie on the rail above the transom windows, which are in relief and highlighted with gold paint. The lower masts are white with white tops and trestletrees and spars are bare wood, with black yards with white tips. Being plank on frame construction the model is essentially hollow, and appears to be painted white internally.

Flags: The flag of the Netherlands hangs at the stern

Location: North west corner of the church in an archway at the rear of the nave, suspended by wires at the stern and foremast.

What’s interesting from this description is that there is indeed the cross of St Andrews on a shield present on the boat. Was that was a later addition when the ship was restored at the time of the donation by Dorothea, or was it always there and could be a clue to connecting Hugh and the boat to the church?

After much deliberation, perhaps and without any further information it’s likely that the logical conclusion could be the Episcopal connection to the Walpole family, Dorothea being an Edinburgh resident, Their father being the Bishop of Edinburgh and connected to the Episcopal community is why Dorothea ultimately decided to gift it to All Saints church. I’m still curios that Hugh did have some sort of connection to St Andrews University though – I still think that there was more to this line of enquiry – if more facts turn up on this I’ll be sure to update this article.

Where did hugh acquire the ship?

So back to the other question – where did Hugh acquire the ship? One thing we do know is that he was a frequent purchaser of antiques at auction so it is possible it was a confident hand in the air that won a lot. Usually he was prone to buying antique books and grand paintings but I suspect objet d’art were fair game too when bidding fever hit.

What might be a better place to start on this question is when is he likely to have acquired it? That we can potentially narrow down through archival photgraphs and records.

Given we know the dimensions of the boat and it’s length was 1.75 metres long, we can start to think about the space needed to house a model of that size. Before Hugh moved to Brackenburn in 1924, his space was limited as my post detailing Hugh’s Dwellings Throughout His Life details, everywhere he lived before Brackenburn was likely too small to house such a big item. Even his town house at 24 York Terrace was compact, mainly filled with bookcases and pictures and small artefacts of his literary hero Sir Walter Scott.

So the earliest it’s likely he acquired it would be 1924 onwards, though can we identify a window to narrow things down further?

In 1931 Hugh produced a private book called ‘A Cottage and A Cow’ – a self created semi scrapbook containing a series of newspaper articles pasted into plain stiff paper pages mainly documenting the discovery of and his subsequent move into Brackenburn in 1924. It’s a fascinating book and I believe he only made one or two of them for very close friends. In my collection I have the one he gave to his companion Harold Cheevers. There is a photo in the book showing his writing room and there in the picture is the model ship in question. 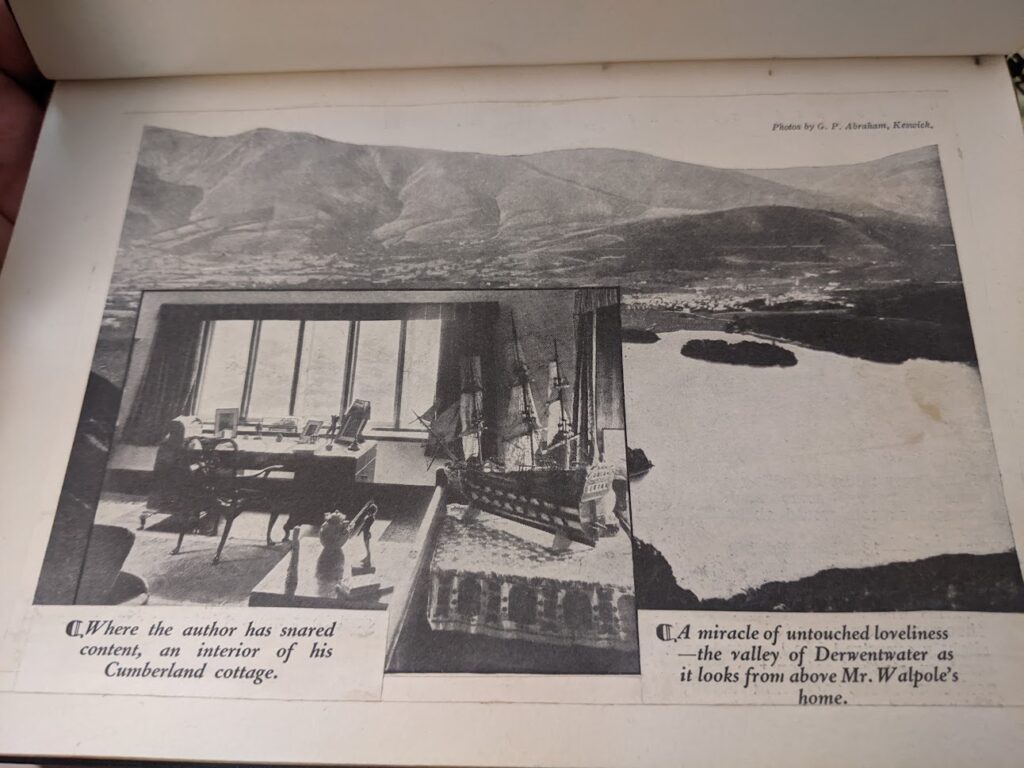 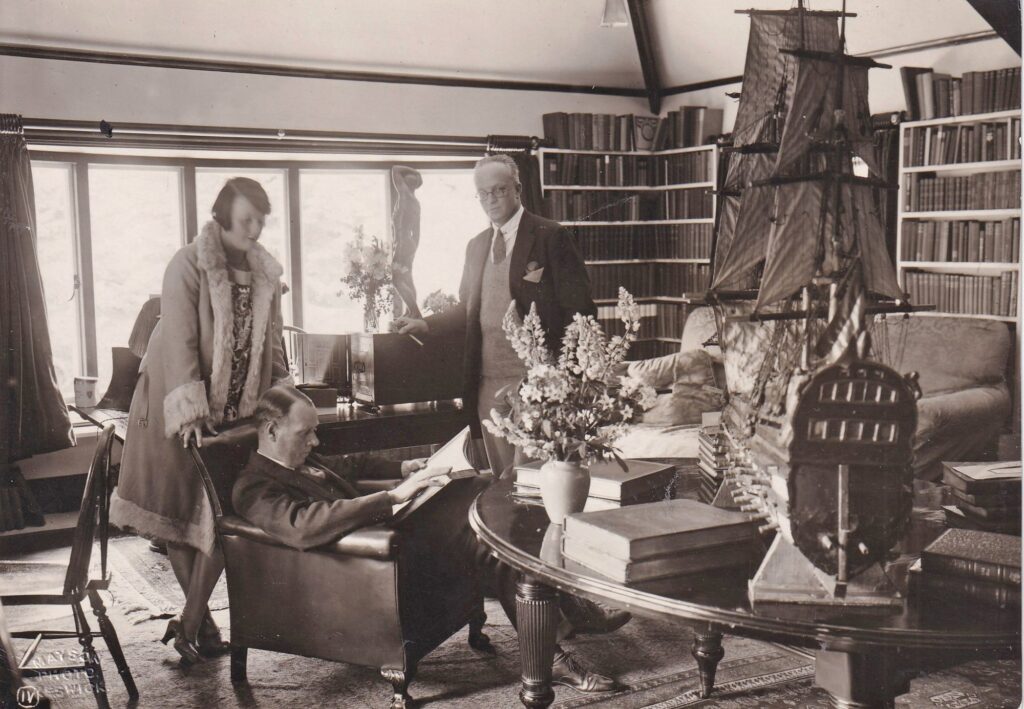 [However the image of Sinclair Lewis and his new wife sitting in the writing room in July 1928 being entertained by Hugh clearly has the ship in the foreground. So there’s our window for it’s potential acquisition – April 1924 to July 1928.

I did have a brief thought that perhaps he inherited the ship from his father, given he had the main Episcopal connection, though GHS Walpole died in 1929, a year after the ship was seen in the Sinclair Lewis picture which likely rules out inheritance, and in any case his father in his work was prone to moving around so it’s unlikely he had many possessions let alone a model boat of this size.

One of my projects I’m keen to start on soon now I’m actually living in Cumbria is a more in depth study of Hugh’s ‘Brackenburn Books’ – the 15 volumes of his diaries he kept throughout his tenure at Brackenburn, which are held by Keswick Museum in their archives. When I do put aside time to delve into those tomes and do more research I’ll be sure to search that time window for a mention of any auction purchases. Perhaps that might surface some more evidence.

So we’ve taken another trip back in time, sailing ever closer to an explanation but tantalisingly just out of reach of a definitive answer – something that keeps the spirit of Hugh alive and the impetus for this website to keep on with it’s work . It’s a line of research that’s still open though and if there are any more discoveries about this mysterious ship I’ll be sure to post an update.

Many thanks to Nick Redman for posing the question, and if you are reading this and have a similar question or have any more information about the ship I’d love to hear from you!